It is never too late

It is never too late. I was seventy-two years of age when some six years ago I found Christian Science, after anything but an exemplary life. A cattleman in the Argentine, I had served in both World Wars and had nothing much to my credit in between. Then there were some years in East Africa, partly spent in the humid heat of the coast. I was seldom free from the influence of alcohol during this latter experience.

I had been suffering from acute bronchial asthma for some time when cataracts developed on both eyes, rendering me useless. I had to give up work. I returned to Nairobi, where I was in and out of the hospital every few months, practically existing on drugs, injections, and oxygen. After my eyes had been operated on, the sight remained clouded, owing largely to my generally poor condition, and I was unable even to read. I used to sit day and night, unable to lie down in bed, and wonder what was the use of attempting to carry on, what reason there was in it.

Send a comment to the editors
NEXT IN THIS ISSUE
Testimony of Healing
For many years my husband and I and our two children have... 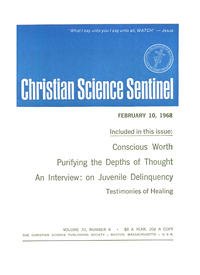