Many years ago when Christian Science was first presented to me,...

Many years ago when Christian Science was first presented to me, I was a medical nurse in charge of a hospital for advanced cases of tuberculosis. Seeing so much suffering, and believing that it was sent from God, I came to the conclusion that He was cruel, much more so than any human being, inasmuch as He had all power; and I was afraid.

Then the time came that I myself became ill. I was suffering from incipient tuberculosis; and, as I was in a strange country without anyone to help me, the future looked dark indeed. At this point I was persuaded to call on a Christian Science practitioner. I went mostly out of curiosity. I shall never forget the wonderful peace that filled her home. I poured out all the bitterness I felt toward God, who sent so much suffering to mankind.

Send a comment to the editors
NEXT IN THIS ISSUE
Testimony of Healing
In gratitude for inspiration received from testimonies in the periodicals... 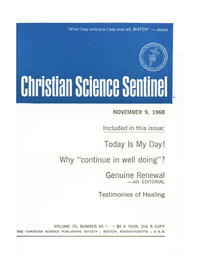