The Doom of Idolatry

Thousands of years ago the Hebrew prophets exhorted their people to abstain from the idol-worship practiced all about them. Today Christian Science warns that the enlightenment of the present age has not destroyed mankind's fondness for false attractions or their worship of false gods. It tells us further that the idols of modern times are inherently more subtle and dangerous than primitive ones could ever be. Mrs. Eddy writes, "The idols of civilization are far more fatal to health and longevity than are the idols of barbarism." Science and Health, p. 173;

In the primitive worship censored by the prophets, natural objects or artificial likenesses of them served to some extent as rudimentary symbols of a higher power or intelligence. When Christianity spread through the ancient Mediterranean world, there were hearts ready for its all-embracing message. Both cultured pagans and rude barbarians were able to accept in some degree the concept of the oneness, the allness, and the Fatherhood of God taught by Christ Jesus and his followers. However diverse their native customs and beliefs, they generally had held some degree of faith in the existence of unseen verities, of a higher governing intelligence than could be seen in the mere process of nature. 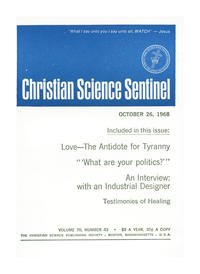