A Time to Rebel

Rebellion. One hears of it on every side these days. Colonies are rebelling against their mother countries, peoples against governments, races against environmental restrictions, labor against management, children against parents. Rebellions are going on even against some of the rules and concepts of churches. While some rebellions of this kind may not be righteous and acceptable, there are times when it is not only right but imperative to rebel.

Christian Science points out that one of these occasions arises when a so-called power, calling itself disease, tries to invade one's consciousness and to disrupt the harmony of God's government. In Science and Health, in a paragraph with the marginal heading of "Righteous rebellion," Mrs. Eddy writes: "Instead of blind and calm submission to the incipient or advanced stages of disease, rise in rebellion against them. Banish the belief that you can possibly entertain a single intruding pain which cannot be ruled out by the might of Mind, and in this way you can prevent the development of pain in the body. No law of God hinders this result." Science and Health, p. 391; 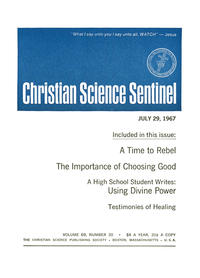