[The above is an abbreviated, postproduction text of the program released for broadcast the week of June 23-29 in the radio series, "The Bible Speaks to You." Heard internationally over approximately 1,000 stations, the weekly programs are prepared and produced by the Christian Science Committee on Publication, 107 Falmouth Street, Boston, Massachusetts 02115.]

RADIO PROGRAM NO. 273 - Students and Drugs, Part I

Questioner: Most students I know may never have been to a "pill party," but they are familiar with drugs. In fact, some have taken so many things to calm them down or keep them awake or put them to sleep that they might ask, "What's really harmful about the careful use of marijuana, LSD, or other mind-altering drugs?Speaker: The various dangers associated with the use of drugs, the danger to the individual of repeated and increased use of them, and even the legality of drug taking have been discussed so much that we might look at certain aspects of drugs in a broader focus. I suppose a number of students really get interested in drugs through curiosity or just for kicks or to get in with a certain crowd. And there are many others who turn to them frankly looking for release from problems.Questioner: Students who rely upon the ordinary tranquilizer or a pill that will give them a lift when they're depressed would ask, "What's wrong with that?"

Speaker: Well, I'm not here to tell anybody that he's wrong but rather to raise some questions we can explore. One question is: By taking drugs are we really solving our problems or dodging them? Now, suppose one turns to a drug because one is depressed, anxious, overtense, or whatever the reason. There must be a reason, and we had really better get at the reason. Otherwise it isn't really solved, and it can fester and grow beneath the surface. I think most students would want to be realistic and feel that they are facing up to facts. I don't think a student would really want to belong to this so-called peace of mind cult which says peace at any price, drugging oneself either chemically or mentally to forget things instead of really confronting them. 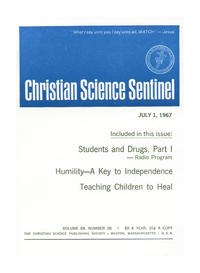