Healing the Motive for Theft

Only a few seconds after a supply of food had been scattered on a bird feeding station, a dozen or more sparrows began to gather. Some alighted on nearby bushes in order to survey the prospects of a meal, while one, displaying less caution, immediately swooped down to pick up a crumb, flying away quickly with the intention of eating it at leisure and in private.

This would have been a happy scene except that to the birds which had been holding back, the sight of another sparrow carrying a beakful of food was a signal to give chase. Heedless of the abundance still lying on the feeder, they followed this one with raucous chattering, viciously harrying it in their attempts to grab the crumb. Apparently they believed that their own hunger could only be satisfied by stealing. 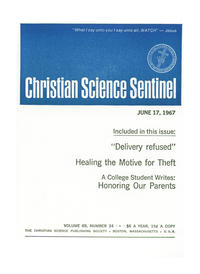