"Action, in obedience to God"

In the book of Exodus we read of God telling Moses to return to Egypt and lead the Israelites out of bondage. One of the synonyms for God given to us by Mrs. Eddy is Mind. Was it not God as Mind speaking to Moses that gave him the assurance he needed to obey and that resulted in what appeared to be miraculous happenings in the journey out of Egypt and ultimately into the Promised Land? Even in the wilderness when the children of Israel were disobedient and when there appeared to be lack, Moses turned to God; and he was always led to the human footsteps that had to be taken. Might it not also be said that he was training the Israelites to turn to God as Mind?

Does not this epic indicate the mental approach the student of Christian Science should have to the changes which are taking place in world affairs? Certainly he must make sure that he understands God, the only Mind, as the Mind which guides him in all his activities and relationships in human affairs. This understanding enables him to grasp the reality of the one Mind as the only power to be acknowledged in world affairs. 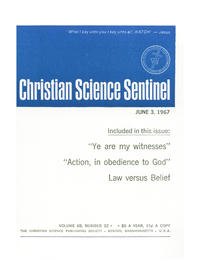