When I was a young child, my mother became very ill

When I was a young child, my mother became very ill. A neighbor, hearing of her condition, called on Mother and asked if she might come and read to her from Science and Health by Mrs. Eddy. Mother had never heard of Christian Science. Not wishing to appear ungrateful, she assented, and this dear neighbor came daily and read a little longer each day. In a very short time my mother was healed. She had not been having medical treatment during this period.

Mother and I started attending a Church of Christ, Scientist. Soon, however, my father was transferred to another town (he was subject to transfer every third year), and we could not attend a Christian Science church for a number of years. Later I attended church off and on during my four years at a university, but I didn't identify myself as a Christian Scientist.

Send a comment to the editors
NEXT IN THIS ISSUE
Testimony of Healing
An impelling passage from page 255 of Science and Health by... 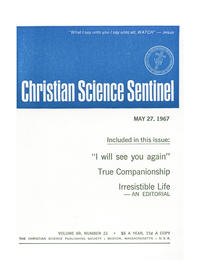