I wish to express my gratitude for Christian Science

I wish to express my gratitude for Christian Science. When I was a teen-ager, I became ill while in a department store one day. My sister took me to a quiet place in the store and gave me a copy of the Sentinel which she found there. Shortly before this I had heard Christian Science mentioned favorably. At that time I could not read English fluently, but I was able to distinguish the word God. My need was great, I was receptive, and I was healed almost immediately. Since that time I have used Christian Science for all my needs, and I learned to speak and read English mostly through studying Science and Health by Mrs. Eddy.

One of my healings was that of a fistula which had been operated on before I began to study Christian Science. Years later it returned with severe pain. I called a practitioner, who gave me one treatment. The condition was healed overnight and has not returned through the eleven years that have passed since that time.

Send a comment to the editors
NEXT IN THIS ISSUE
Testimony of Healing
Christian Science has healed my wife and me of the effects of... 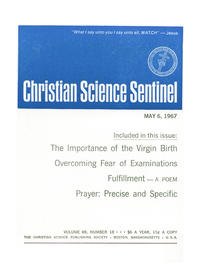