Since the beginning of time mankind has been forced by the elements of earth or by enemies to find a place of refuge from danger. Prehistoric men sought safety from weather and wild beasts in caves. As humanity progressed, castles, forts, garrisons, and so on provided means of safety. During World War I and World War II people under attack fled to bomb shelters.

Mankind has now reached a stage where it recognizes that human safety cannot be completely found in material structures. The advent of the atomic age with the intense, destructive force of nuclear power is compelling mankind to doubt the ability of material places or structures to provide safety. 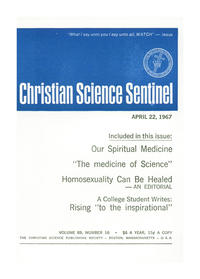