For a considerable time I had experienced daily hemorrhaging

For a considerable time I had experienced daily hemorrhaging. The fear of death had to be handled. With the help of a Christian Science practitioner and my own prayerful study of the Bible and the writings of Mrs. Eddy, I gained a new understanding of God as the only and uninterrupted source of life. Mrs. Eddy says on pages 465 and 466 of Science and Health, "Principle and its idea is one, and this one is God, omnipotent, omniscient, and omnipresent Being, and His reflection is man and the universe."

God's idea is not created to be destroyed or diseased by error and then brought to perfection again. God's work was finished and was very good, as we are told in the first chapter of Genesis. This goodness, I began to understand, is not a personal possession. All good has its source in God. I recognized this reflected goodness, evidencing the unity of God and man, in myself and those around me. The hemorrhaging stopped, but three weeks later it began again. The error was dismissed as a suggestion that had never touched my true selfhood. The healing has been permanent.

Send a comment to the editors
NEXT IN THIS ISSUE
The Bible Speaks to You
RADIO PROGRAM NO. 293 - Students and Identity, Part II 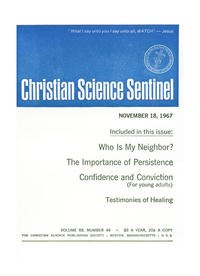