Years ago my husband was taken suddenly ill and passed on...

Years ago my husband was taken suddenly ill and passed on. I was stunned and grief-stricken. I didn't know which way to turn. I was a young woman with two children to rear and a home to maintain. I prayed earnestly as well as I could to know what to do.

I began to recall some of the statements which I had read in some Christian Science literature my sister had sent me. I called a Christian Science practitioner. She was very kind and gave me much encouragement. She told me either to borrow or buy from a Christian Science Reading Room a copy of Science and Health by Mrs. Eddy and to read and ponder it. I ate up the book; I read every free moment I had! I recognized almost from the beginning that I had found the truth and that it was really what I had always fundamentally believed. My grief was healed. Appropriate work was secured to help supplement my income. Step by step things began to fall into place. Since that time I have relied on this truth.

Send a comment to the editors
NEXT IN THIS ISSUE
The Bible Speakes to You
RADIO PROGRAM NO. 248 - What Does the New Year Offer You? 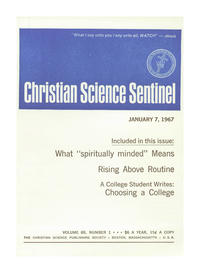