In the Bible there is an account of a shipwreck in which Paul and the others on board "escaped all safe to land," Acts 27:44; on the island of Melita. The people of Melita built a fire for the shipwrecked crew to warm and dry themselves, and after Paul had gathered a bundle of sticks and laid it on the fire, a viper fastened on his hand. Immediately those around him thought that he was a murderer and not worthy to live, but when Paul "shook off the beast into the fire, and felt no harm," those standing around "changed their minds, and said that he was a god." 28:5,

Because they knew no better, these people of Melita were judging the situation from a physical, material standpoint, believing what mortal mind claimed to be true. But the testimony of material sense is never true. Paul, on the other hand, knowing the falsity of the time-honored opinion of mortal mind, was unafraid and proved that an asp could not destroy his life. Had not Christ Jesus said, "Ye shall receive power, after that the Holy Ghost is come upon you: and ye shall be witnesses unto me both in Jerusalem, and in all Judæa, and in Samaria, and unto the uttermost part of the earth"? 1:8; 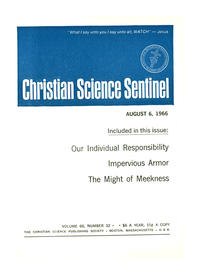