Put Off the Limited Sense of Self

Do you ever argue within your own thinking with a hypothetical enemy who you suppose is taking advantage of you? It may be the boss or the supervisor, the next door neighbor, the school principal, or a relative. And you're in the process of telling him off in no uncertain terms. You get stirred up to the point of anger and resentment and are rapidly approaching the boiling point. Then all of a sudden you wake up to the fact that no such situation exists in reality and there is no reason for such an emotional upheaval. You may wonder, "How did I ever get into such a state of thought? Why should I assume that such a situation can arise and I be imposed upon?"

The answers lie in the false, limited personal sense of self, that is, the ego or personality based on matter, which is constantly feeling inferior and sensitive. It imagines these situations where it feels it must strike out to defend itself. An important point involved here is the fact that the sense of limitation comes from within this false consciousness, that is, the suffering is self-imposed. 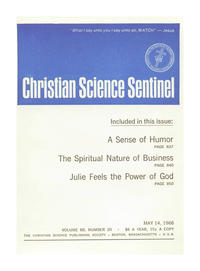