The Reward of True Zeal

While it was spiritual sense that enabled the patriarch Abraham to perceive that three individuals approaching his tent were holy messengers from God, it was true zeal that caused him to run to them, feed them, and do them honor. We are told in the eighteenth chapter of Genesis that his zeal was rewarded, not only by the prophecy of the destruction of Sodom and Gomorrah but by the promise of a son; and he learned of his divine mission to found a great nation, in whom "all the nations of the earth" should be blessed.

Throughout the Bible, zeal, like a beautiful golden thread, weaves its luster through the lives of loved characters. In the New Testament we read that Zacchaeus, a little man who was eager to see Jesus in the crowd, as the Master passed by on the way to Jerusalem, climbed a tree to get a better view. (See Luke 19:1–9.) His zeal was rewarded by his having the Master as a guest in his house. Zacchaeus, it was proved, was not such a little man after all. 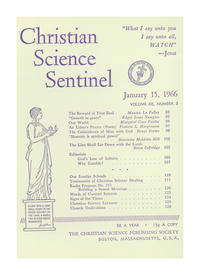