Good news is being constantly received by Christian Science Activities for the Armed Services. Most of it is reported as healings, the rest as interesting experiences, noteworthy developments, and important incidents.

One incident reported was the selection of a Christian Science Representative in the Armed Services as the Outstanding Airman of the Year for a major air command of the United States Air Force. As a reward for winning this honor the serviceman and his wife were flown from Japan to Washington, District of Columbia, to represent the air command at the annual Air Force Association convention. The letter recommending the serviceman for the award stated that one reason for his receiving it was that he is "a Representative for his religious denomination." The airman has expressed gratitude on this point, and for his understanding of Christian Science, which, he says, enabled him to manifest the qualities that were recognized at the highest Air Force level.

Send a comment to the editors
NEXT IN THIS ISSUE
Testimony of Healing
Each day Christian Science is... 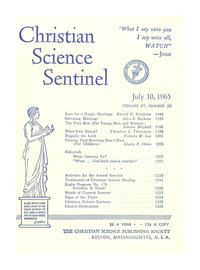