Christian Science was presented to me many years ago when I was living in the United States. Since childhood I had been searching for something more than an orthodox church could offer me. Questions relating to the nature of God and to our purpose in this world remained unanswered until I was growing into womanhood and a friend spoke to me of Christian Science. The textbook was placed in my hands, as were the other writings of Mrs. Eddy, and I felt at once that this religion was the treasure for which I had been seeking.

Although I studied as often as I could, I did not gain a proper understanding for many years, and during this time I clung to my former church. However, the seed was developing, and in due course I took the requisite steps to become a member of The Mother Church.

Send a comment to the editors
NEXT IN THIS ISSUE
Testimony of Healing
I am so deeply grateful for Christian Science... 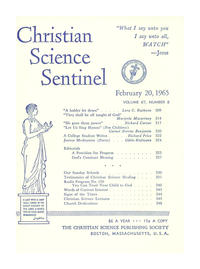