The understanding of what demonstration...

The understanding of what demonstration in Christian Science really is appeared clearly to me during a season of extensive study. I saw that demonstration comes as we catch a glimpse of a divine law, which has been operating all the time, and we catch such a glimpse as we are prepared to see it. I found that we become ready to catch this glimpse as we claim that the truths of Science are true whether we understand them or not. Then demonstration takes place, and we begin to understand. We become aware that the spiritual universe is present and that everything in it is exactly right.

When our son was eight years old, he used the truth to work out a school problem with no help from anyone. This was his first demonstration through his own application of Science. Another youngster was unkind to him. He told me that he let it lie and knew the truth that all is well. Later, the other boy came to play joyously.

Send a comment to the editors
NEXT IN THIS ISSUE
The Bible Speakes to You
RADIO PROGRAM No. 132 - You Can Do Your Best 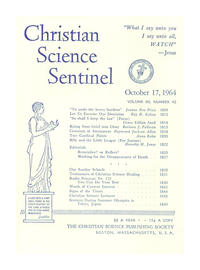