I was not reared in Christian Science...

I was not reared in Christian Science but was introduced to the study of it by some very dear friends, and it has blessed me in many ways. It has given me a sense of God's ever-presence and protection. Soon after I began the study of it, I experienced an instantaneous healing of influenza.

A healing which caused me to make much progress spiritually occurred nearly four years ago. While playing badminton, I broke a bone in my right ankle. I immediately turned to Christian Science for my help and began studying and declaring spiritual truths from Science and Health by Mrs. Eddy. I later bumped my leg, causing further damage about halfway between the ankle and knee. The material evidence was quite alarming after this, and it was necessary for me to use crutches; so I called upon a practitioner for help.

Send a comment to the editors
NEXT IN THIS ISSUE
Testimony of Healing
I have been an earnest student... 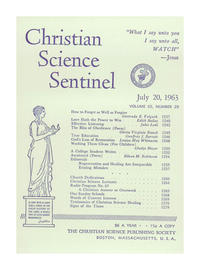