[The above is substantially the text of the program released for broadcast the weekend of July 5-7 in the radio series, "The Bible Speaks to You," heard internationally over more than 800 stations. This is one of the weekly programs produced by the Christian Science Committee on Publication, 107 Falmouth Street, Boston 15, Massachusetts.]

RADIO PROGRAM No. 66 - How You Can Have Some Peace and Quiet

HOST: Recently a number of magazines have commented on the raucous clangor of modern living. They report that for some people noise is just a nuisance; but for others it's a major problem, jangling the nerves, robbing them of sleep, shattering their serenity.

In the Saturday Review, Editor Norman Cousins said, "The noise level is rising...." He described offensive noises as "tranquility-smashers." He said that they "invade the innermost core of an individual's privacy, impeding the processes of sequential thought, breaking down the sensibilities, and unhinging the capacity for serenity." 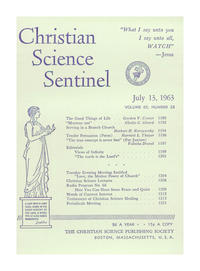