I have indeed proved that Christian Science...

I have indeed proved that Christian Science is the Comforter, the Christ, Truth, which Jesus promised would come. I had a very unhappy childhood. I had an older sister who dominated me completely, and I was terrified of her. Our parents were very much distressed about it but were unable to prevent the domination. Some time later I heard of Christian Science, which showed me how I could claim my freedom. Then my sister went away to live, and for many years she would have nothing to do with me because I had become a student of Science.

By the time I took up the study of it, my father, who was a clergyman, had passed on, and my mother strongly disapproved of my action; but when she realized the transformation in me from ill health and misery to health and happiness, she gratefully acknowledged it was the right thing for me. She loved my Christian Science friends; so when I joined a branch Church of Christ, Scientist, she was quite happy about it. A member of her church called to commiserate with her over her daughter's action, and she gave a wonderful answer. She said, "All I can say is, it's a religion of Love, and they practice what we preach."

Send a comment to the editors
NEXT IN THIS ISSUE
Testimony of Healing
One day I struck my head and... 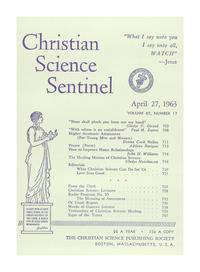