When I was six years old, my father began to teach me many psalms which I learned by heart, including the twenty-third; he told me these were our shield and buckler for life. Ever after that, I searched for the truth in action. Thirty years later, on the eve of the Second World War, I began to study Christian Science.

I had been telling a Swiss friend of my longing, when she exclaimed, "This is what you need!" She showed me her copy of Science and Health by Mrs. Eddy and a copy of the Quarterly and described her own healing through Science of a cataract.

Send a comment to the editors
NEXT IN THIS ISSUE
Testimony of Healing
I should like to tell of a business... 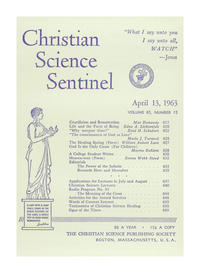