[The above is substantially the text of the program released for broadcast the weekend of February 15-17 in the radio series, "The Bible Speaks to You," heard internationally over more than 800 stations. This is one of the weekly programs produced by the Christian Science Committee on Publication, 107 Falmouth Street, Boston 15, Massachusetts.]

RADIO PROGRAM No. 46 - Your Defense Against Jealousy

HOST: People are often as reluctant to admit that they're jealous as they are to admit that they don't have a sense of humor! Sometimes jealousy may sound rather petty and insignificant. But every year it's credited with doing a great deal of harm.

In an article in Think magazine, Dean Roy Pearson of the Andover Newton Theological School described in a very graphic way the effect that just one jealous executive can have on a business organization. He said, "A jealous man has no smoothness in his contours. His personality is bounded by sharp edges, and being 'edgy,' he inspires edginess in those around him. Suspicious of everyone, he makes everyone suspicious of him. Cliques spring up unannounced. Battle lines are drawn. And the struggle of the organization is subtly changed from competition with its rivals to civil war within itself." 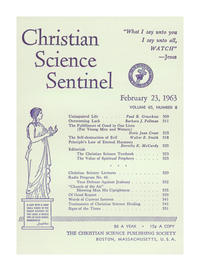