Two days before Christmas a few...

Two days before Christmas a few years ago I was talking on the telephone when one of our three children called that there was a fire under the Christmas tree. I dropped the receiver and ran to grab the tree out of the flames. The cotton under the tree was on fire, however. I tried putting it out with my feet and then with a hassock, but was not able to control it. At this point I stopped trying humanly to find a way to put the fire out and called aloud for divine help. In spite of the fact that the flames were by then three quarters of the way up the drapes, I was able to pull them down. I then carried pans of water to the living room, finally extinguishing the fire.

I then called a practitioner and told her that my hand and arm had been burned, and I remember asking her what I should do with three very young and very frightened children. Her reply was that we should sing Mrs. Eddy's hymn, "'Feed My Sheep'" (Poems, p. 14), which includes these lines:

Send a comment to the editors
NEXT IN THIS ISSUE
Testimony of Healing
Christian Science came to our... 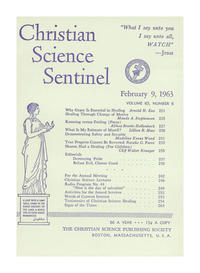