Generally speaking, there are three occasions when the Armed Forces require physical examinations: (1) at the time people enter military service, (2) when they have their annual physical checkup, and (3) upon their separation from the Forces. Christian Science Activities for the Armed Services continually receives reports from its Field workers of help given people in danger of being refused admittance to the Armed Forces or threatened with separation from the Forces because they were unable to pass required physical examinations. Deficiencies in eyesight and hearing and many other physical difficulties have been healed through Christian Science treatment.

When an Air Force officer took an annual physical examination, he was told that he had high blood pressure and would have to take tests for three days. Immediately he requested help from a Christian Science Minister, and soon the condition was normalized. Then the doctors said their examinations indicated an organic heart disease and that the officer would have to return for tests which would last all day. Within an hour after the tests began, the doctors released him, saying that he was all right. 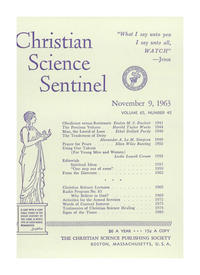