My mother began the study of...

My mother began the study of Christian Science when I was about two. I went through childhood without experiencing so-called children's diseases. My sister, brother, and I were benefited by our mother's reading to us from the Bible and from Mary Baker Eddy's writings. This good foundation was valuable later when I had to prove for myself the truths of Science.

My marriage brought problems which were followed by a serious physical difficulty of an internal nature. It was never diagnosed; but it manifested itself in many distressing ways, and I could not continue my work. My position was held open for me, however, for which I was grateful.

Send a comment to the editors
NEXT IN THIS ISSUE
Testimony of Healing
In 1923 I was examined by a... 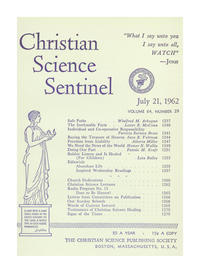