I should like, as far as it lies within my ability to do so, to express my deep gratitude for Christian Science. It seems to me as if I really began to live aright when I started to study this wonderful Science in earnest. It was first introduced to me many years ago when I was living in the United States of America. I saw at once that its teachings were true and that it heals.

Shortly after that my husband and I moved back to Denmark, and we took with us the textbook, Science and Health by Mrs. Eddy. This book was a comfort and help to me in a difficult period. It was not until some years later that we found out that a few people who were interested in Science were in the habit of meeting in a private home to read the Lesson-Sermon, outlined in the Christian Science Quarterly. We were invited to join them, and then we put our home at their disposal for meetings and gatherings until a hall was found which was better adapted to the purpose.

Send a comment to the editors
NEXT IN THIS ISSUE
Testimony of Healing
When I was a new student of... 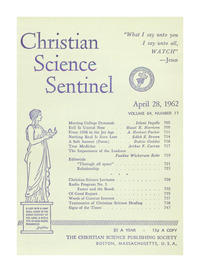