[The above is substantially the text of the program released for broadcast the weekend of October 12—14 in the radio series, "The Bible Speaks to You," heard internationally over more than 800 stations. This is one of the weekly programs produced by the Christian Science Committee on Publication, 107 Falmouth Street, Boston 15, Massachusetts.]

[This is the last in a special group of four programs on the subject "Should Religion Heal?"]

HOST: There isn't any doubt any more that prayer can heal sickness. This is being more and more widely recognized today in many churches. For example, a well-known Methodist minister, Dr. Albert E. Day, wrote these words in his book, "An Autobiography of Prayer" [Harper and Row, Publishers, Incorporated]: "The fact is, indubitable cancers so declared by medical science; have been healed by spiritual means. The witness to that is so reliable that it cannot be challenged except by a skeptic whose stubbornness is not amenable to evidence, which would be accepted on any other matter."

Send a comment to the editors
NEXT IN THIS ISSUE
Article
Christian Science: The Way of Life 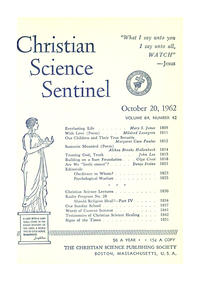