In 1930 I was a physical wreck and on the verge of despair. For fifteen years I had been suffering from gall bladder colic, infection inside my head, and a sense of depression. While I was in this state, a friend came to see me. After twenty years of illness, she had been healed in Christian Science; so she persuaded me to attend a Christian Science lecture to be given in a few days.

I went, though I was quite unenthusiastic. I really did not want to know anything about Christian Science, for I had no faith in it. I sat in the farthest corner of the hall from the platform. At first I did not hear anything, but then the words began to come to me loudly and clearly.

Send a comment to the editors
NEXT IN THIS ISSUE
Testimony of Healing
The Wednesday testimony meetings,... 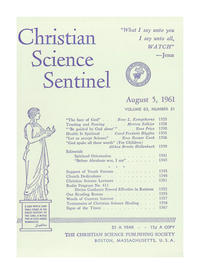