Since becoming a student of...

Since becoming a student of Christian Science, I have been the beneficiary of so much good that I should now like to share some of it with others. I have learned the truth of Mrs. Eddy's words (Miscellaneous Writings, p. 3), "The lessons we learn in divine Science are applicable to all the needs of man."

In 1947 I became unemployed. Since I had not previously had any difficulty obtaining employment, I was not concerned. I took a position which promised a bright future, and all went well for about a year; but advancement which had been promised failed to materialize. This was apparently due to the fact that I did not drink socially with senior members of the staff. One Monday when I reported for work, I was informed that because I was held responsible for a mistake made by one of the men working under me, I was to be dismissed. 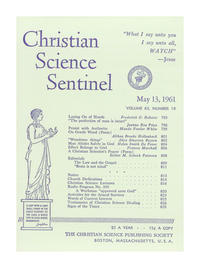