The territory of Asher, which lay in the west portion of what was later called Galilee, was and is especially productive of olives and of the oil produced from them. Some commentators suggest that the prediction that Asher would "dip his foot in oil" implies that this province would produce so much oil that it would overflow from the vats and run along the ground.

Send a comment to the editors
NEXT IN THIS ISSUE
Testimony of Healing
The healing which I should like... 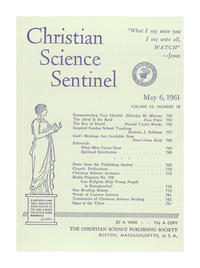