"Christian Science ... shows us how to draw the line of demarcation between the real and the unreal"

Mrs. Eddy, in her book Science and Health, has given the reader an illuminating chapter entitled "Genesis." This chapter interprets the two accounts of creation as given in the Bible. In the first account, God is recorded as creating the universe and man and as pronouncing this creation "very good" (1:31). In the second stage of this creative unfoldment, God created the firmament, whose office was that of dividing "the waters which were under the firmament from the waters which were above the firmament" (1: 7). 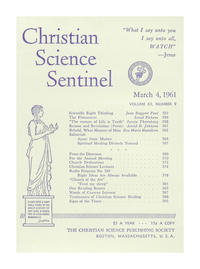