Continuing in the Word

Christ Jesus knew the tenacity of the carnal mind, and he taught by parable the need for continuing in prayer until the Father's will is demonstrated. In the eighteenth chapter of Luke we have the parable of the unjust judge who was importuned by a widow who wished to be avenged of an adversary. Although the judge "feared not God, neither regarded man," he took care of her plea rather than endure her "continual coming." The Master brought home his lesson by saying, "Shall not God avenge his own elect, which cry day and night unto him, though he bear long with them?"

The tenacity of sin and sickness forces the Christian Scientist to persist in his efforts to prove the spiritual perfection of God's man and the nothingness of the errors that assail the human self. Such efforts should not cease until a normal state of thought is attained, with health restored, sin destroyed. Even if this takes a long time, the prayerful work should continue. Truth must be brought to light; error must give up its godless claims. 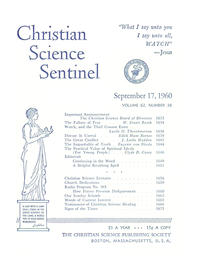