"Train up a child"

A wise man declared (Prov. 22:6), "Train up a child in the way he should go: and when he is old, he will not depart from it." Parents are sometimes concerned about how far they should go in directing the conduct of their children. If the parents are students of Christian Science, they have available in its teachings a valuable guide in properly training the budding and maturing thought.

In Christian Science one learns that God is the universal Father and Mother of man, that He is Principle and Love, that He has no immature ideas, and that He controls His creation with undeviating authority. Principle establishes and enforces its own perfect rules. God's laws are exact and exacting. These laws are in reality incapable of being disobeyed. 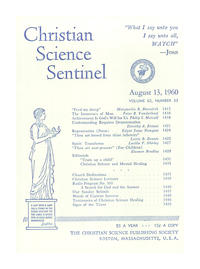