[The above is substantially the text of the program released for broadcast the week end of July 15—17 in the radio series, "How Christian Science Heals," heard internationally over approximately 700 stations. This is one of the weekly programs produced by the Christian Science Committee on Publication,107 Falmouth Street, Boston 15, Massachusetts.]

RADIO PROGRAM No. 357 - Some Young People's Thoughts on Religion

SPEAKER: Today we're going to hear from four young people, two from high school and two from college. They are David Hennerman, a sophomore at City High School, Battle Creek, Michigan; Judy Rieder, from Kansas City, Missouri, a junior at Kansas University; Margaret Anderson, a high school senior from Yorktown Heights, New York; and Richard Kemp, a junior at Occidental College in Los Angeles, which is also his home town.

Now, I know all of you are Christian Scientists, and we'd like to hear some of your thoughts on how religion can help young people. 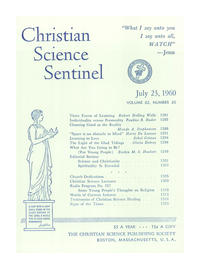