[The above is substantially the text of the program released for broadcast the weekend of December 16-18 in the radio series. "How Christian Science Heals." heard internationally over approximately 700 stations. This is one of the weekly programs produced by the Christian Science Committee on Publication. 107 Falmouth Street, Boston 15, Massachusetts .]

RADIO PROGRAM No. 379 - Victory over Loss

SPEAKER: What can you do if you're faced with the loss of something that's deeply important to you? This is a familiar challenge to all of us. But whether it's the loss of a home, income, or a dearly loved companion, there's a way out of the valley of discouragement and gloom. Our guest. Peter Vanderhoef, of Houston, Texas, found this way.

MR. VANDERHOEF: I had to face this challenge of loss a number of years ago. Really the thing that brought it to a head was a business crisis. I'd made a substantial investment in an oil business, and it was going from bad to worse. I'd poured money into it beyond the original investment until I didn't have any more to put in. I withdrew from active participation in it: but my money was still tied up, and I couldn't get it out. Eventually a small company took over the business; but it still didn't go. and after two years they declared bankruptcy. My attorney told me I'd just have to face up to this loss. The district judge in the bankruptcy court had said that if ever he'd seen a dead horse, this business was it. 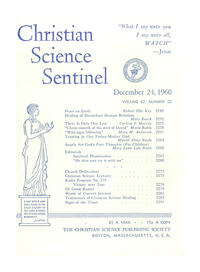