[The above is substantially the text of the program released for broadcast the weekend of October 28-30 in the radio series, "How Christian Science Heals," heard internationally over approximately 700 stations. This is one of the weekly programs produced by the Christian Science Committee on Publication, 107 Falmouth Street, Boston 15, Massachusetts.]

SPEAKER: A man now living in Kansas City, Missouri, John M. Todd, faced a very difficult challenge in his business. His experience shows that it is possible to have divine guidance no matter how complicated the problems may appear to be.

MR. TODD: Well, this happened shortly after World War II. I was sales promotion manager for a large industrial firm in New York. I also handled the trade advertising and public relations. 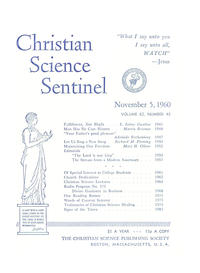