THE SOURCE OF TRUE POWER

Where is true power to be found? There was no doubt of the answer to this question in the thought of David as he stood before the congregation of the people and proclaimed (I Chron. 29:11, 12): "Thine, O Lord, is the greatness, and the power, and the glory, and the victory, and the majesty: for all that is in the heaven and in the earth is thine; thine is the kingdom, O Lord, and, thou art exalted as head above all. Both riches and honour come of thee, and thou reignest over all; and in thine hand is power and might; and in thine hand it is to make great, and to give strength unto all."'

David had proved the truth of the foregoing statements over many years of watchfulness and daily overcoming. While he faithfully tended his father's sheep in the desert, he had overcome the lion and the bear that threatened his flocks. This conquest and that of Goliath, whose display of false strength had intimidated all Israel, had fully prepared and empowered him for the greater tasks of kingship. 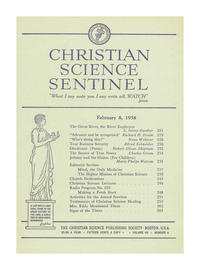