[Following is the text of the program of the above title released for broadcast the week end of December 27-29 in the radio series, "How Christian Science Heals," heard internationally over more than 800 stations. This is one of the weekly programs programs by the Christian Science Committee on Publication, 107 Falmouth Street, Boston 15, Massachusetts.]

RADIO PROGRAM No. 224 - Nothing Too Hard for God

Speaker: Is there any condition or situation so hopeless or so critical that it's beyond the infinite all-power of our heavenly Father to heal or correct? Indeed, there is not! Our guest today had a healing which proved to him beyond all doubt that, as Christ Jesus said, "with God all things are possible." But let's hear Clifford B. Arnold of Des Moines, Iowa, tell us his own experience.

Mr. Arnold: While I was a student at the University of North Dakota., I developed a form of glandular trouble. It was referred to by the physicians who treated me over a period of five years as a tubercular gland. Finally I underwent an operation to have it removed; but I grew worse, and when I talked the matter over with my doctor, he told me that the condition was incurable. He added he felt he should tell me I might live only six months to a year.

Send a comment to the editors
NEXT IN THIS ISSUE
Testimony of Healing
With a heart lifted up in gratitude... 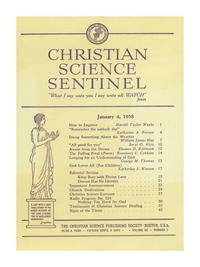