It is interesting to note that the American colonists declared their independence of injustice and oppression "with a firm reliance on the Protection of Divine Providence." Leaning heavily on divine wisdom, God, they entertained neither doubt nor fear regarding their ultimate liberation. Establishing dependence primarily on God, rather than independence of seeming discordant conditions, they confidently exercised in their pursuit of happiness those inalienable rights of life and liberty with which they were endowed by the creator.

Sole dependence on God inevitably demands that one be completely independent of matter. On page 200 of "Science and Health with Key to the Scriptures" Mary Baker Eddy asserts, "Life is, always has been, and ever will be independent of matter; for Life is God, and man is the idea of God, not formed materially but spiritually, and not subject to decay and dust." The man of God's creating, as described in the first chapter of Genesis, is and always has been independent of the baseless fabrications of the Adam-dream, depicted in the second chapter. It is then vitally necessary that we first establish dependence on God in order to realize our independence of the theoretical manifestations of mortal mind. 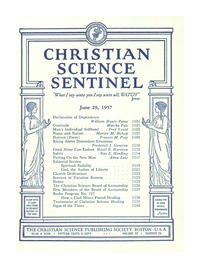