I have experienced many healings...

I have experienced many healings through Christian Science and would like to relate two of them which I feel have been most important to my spiritual growth. For years I desired to overcome the smoking habit and attempted to do so by will power, by abstaining without knowing that freedom was my God-given birthright. Hence, during unguarded moments I would find myself indulging in this loathsome habit again. Knowing that my freedom was requisite for church membership, which I greatly desired, and not being able to overcome the habit, I felt that I was frustrated by my lack of demonstration over it.

Then my wife and I earnestly set to work in Christian Science, applying Mary Baker Eddy's words in "Science and Health with Key to the Scriptures" (p. 1), "Desire is prayer; and no loss can occur from trusting God with our desires, that they may be moulded and exalted before they take form in words and in deeds." After about a month I knew that I was healed, completely and permanently. And so I was, for never again was I tempted to smoke. I became a member of The Mother Church, and very soon branch church membership followed. This healing was and always will be very impressive to me, for it proved the arguments of the so-called mortal mind to be powerless. 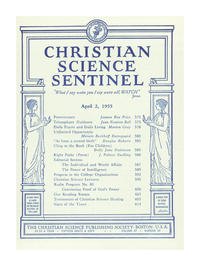