My parents became interested in Christian Science when I was quite young, and notable among my early healings was that of scarlet fever, which took place in a little over a week. It was not until I was in my teens, however, that I really became interested in this religion through a Christian Science practitioner who had a great understanding of young people. To him I owe a firm grounding in the teachings of this Science.

Although my husband is a keen believer in another religion, harmony has pervaded our home, and we have each enjoyed freedom to participate in the activities of our respective churches. Our son is being brought up in his father's religion; our daughter attends a school for Christian Scientists.

Send a comment to the editors
NEXT IN THIS ISSUE
Testimony of Healing
"What shall I render unto the... 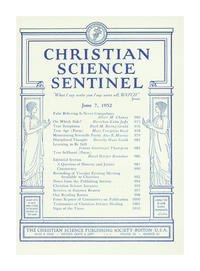