As Christian Scientists we should be careful in our use of the word tolerance, since it does not speak of love. Note the remarks regarding the word tolerance given in a dictionary: "Tolerance implies an attitude of (esp. intellectual) forbearance with reference to views, opinions, or actions with which one is not oneself fully in sympathy."

To tolerate is to put up with, to endure. There is implied in the word tolerance a sense of superiority which no Christian Scientist can accept. He not only agrees with those immortal words in the Declaration of Independence that God created all men equal and endowed them with "certain unalienable Rights," but goes further in realizing that in their true being all men are equal in quality, since they are all created by the same God, who made man in His own image and maintains His sons in eternal brotherhood. 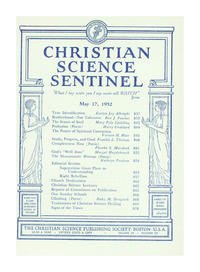