Charles A. Taylor with contributions from Nell H. Taylor

I should like to tell of my introduction to and my first healing in Christian Science. I had a serious throat ailment and had been under the treatment of our family physician for quite some time. When after many months there was no improvement, an operation was performed, but I still suffered from the old ailment and continued to go to the doctor's office for treatment. He told me frankly that since my condition could not be healed by surgery and did not respond to the medicine prescribed, there was nothing further he could do for me and suggested that I try Christian Science.

At that time all that I knew or had heard of this religion was that it was being studied by the wife of one of my co-workers. My first reaction to the doctor's suggestion was one of resentment, for I thought he merely wished to get me off his hands. On returning home I related the experience to my wife, dismissed the thought of trying Christian Science, and went about getting my personal affairs in shape for her to take over in the face of my seemingly hopeless condition.

Send a comment to the editors
NEXT IN THIS ISSUE
Testimony of Healing
It was through the love, gentleness... 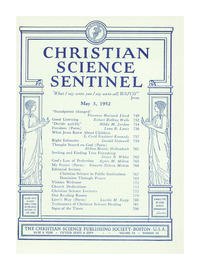