My introduction to Christian Science came when my desire to be with a friend as much as posssible found me attending church on Sundays and Wednesdays with him. After more than a year a physical problem presented itself. My friend recommended that I try Christian Science and see a practitioner. I had been in such pain that I was willing to try anything that offered relief. While I was very skeptical that a practitioner could heal what the doctors had failed to heal, nevertheless I kept my appointment. What a wonderful surprise was in store for me! Instead of staying just a few minutes as I had planned, I stayed nearly two hours. I had found in Christian Science something that I had always wanted, but did not know existed. I learned of God as Father-Mother, as ever-present Love, and of man in His image and likeness, reflecting all His qualities. Right there, in that office, I believe my life started on a new course.

My friend and I were married, and later we entered our two children in Sunday School. Step by step, over a period of more than twenty years, growth in Christian Science has followed. Each day has been a day of rejoicing as I have gained more understanding of the divine Principle of being and of man as an infinite idea reflecting only good. I have learned that when problems present themselves in our human experience, they are not to be regarded as problems, but as opportunities to prove Mrs. Eddy's statement on page 494 in Science and Health, "Divine Love always has met and always will meet every human need."

Send a comment to the editors
NEXT IN THIS ISSUE
Testimony of Healing
Among the many instances of... 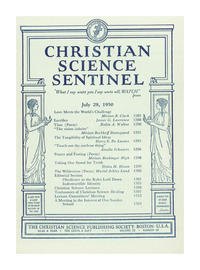