The Scriptures declare that God is Spirit and that man is made in His likeness; but the physical senses can give us no information about this man of God's creating. So long as it is believed that the information obtained through the personal senses is true, the universe of Spirit and the real substance of man remain unseen.

Let us suppose that an uneducated person is placed before a blackboard and the figure 2 is written on the board. To this uneducated person the symbol conveys nothing beyond that which his physical sight shows him, and which he is now told is a 2. On the other hand, if an educated person is placed before the board, his physical sight shows him a material symbol, but his educated mathematical sense informs him of the idea which that number represents, its relation to the principle of mathematics, and its relation to other numbers. Even if the figure on the board is erased, the mathematician experiences no sense of loss, for he retains the reality back of the symbol and knows it cannot be destroyed. 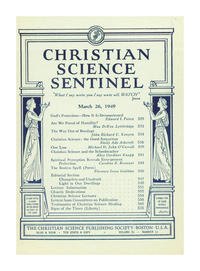