Lawyer and layman will find inspiration in this discussion of Christian healing, the demonstration of divine justice

In all civilized countries wherever men dwell together, systems of administration of justice have gradually evolved for resolving disputes and settling problems arising in human affairs. Courts of law are established whose function it is to receive and consider evidence presented to them, and on that evidence to determine what is the truth of the matters upon which they are asked to adjudicate in order that justice may be done. So, in the final analysis, it can be said that legal procedure springs from an innate desire in mankind for the truth.

It is significant that Mary Baker Eddy chooses the allegory of a court case with which to illustrate the manner in which Mind-healing is accomplished in Christian Science, for a Christian Science treatment is concerned pre-eminently with the truth. Refuting the material evidence as to the patient's condition with the eternal facts of God's spiritual and perfect creation, it proclaims and establishes the truth in the patient's consciousness. The healing of disease by means of this metaphysical process proves the falsity of the physical evidence, for nothing that is true can be destroyed. 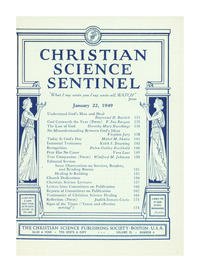