One summer day when the sun was high in the sky, a Christian Scientist remembered Mary Baker Eddy's definition of the word "sun," as given on page 595 of her textbook, "Science and Health with Key to the Scriptures." The definition reads as follows: "Sun, The symbol of Soul governing man, —of Truth, Life, and Love." The use of the word "symbol" reminded her that even our highest human sense of infinite good is but the sign and symbol, not the substance, which is Truth and Love.

By the world of reality is meant the spiritual, true creation as described in the first chapter of Genesis, where God made everything that was made. In the light of Christian Science this creation is seen as spiritually perfect and "very good"—a creation which is infinite, and wherein is no matter. It is stated in this chapter that God made man in His own image and likeness. It is also related that God blessed him and gave him dominion over the fish of the sea, over the fowl of the air, and over every living thing upon the earth. This spiritual creation is the only real, substantial, and true creation.

Send a comment to the editors
NEXT IN THIS ISSUE
Article
HOW NEAR IS THE MILLENNIUM? 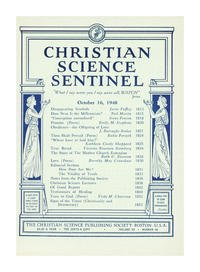