From time to time the question is raised as to whether democratic government can successfully cope with modern national and international problems. The belief is often expressed that the processes of democracy move so slowly that they do not keep pace with the rapidly shifting human panorama, and that perhaps some form of dictatorship might be more efficient.

Democratic government, sometimes referred to as self-government, will be successful in the degree that it is based on the true or spiritual concept of self-government. This concept is given to us by our beloved Leader, Mary Baker Eddy, in her textbook, "Science and Health with Key to the Scriptures." where she says (p. 106): "God has endowed man with inalienable rights, among which are self-government, reason, and conscience. Man is properly self-governed only when he is guided rightly and governed by his Maker, divine Truth and Love." Human government which seeks to exemplify this concept will be enabled to meet every human situation that may arise. 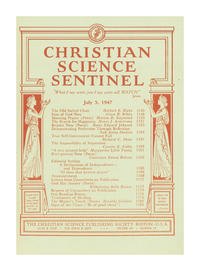