Resting in a woodsy spot upon a high hill, a group of people watched an eagle soar from a tree up into the blue until he was over the spot where they sat. Then he stopped, and with no apparent movement of body or wing, poised perfectly still, looked down at them. The incident opened up a train of argument on the law of gravitation and other material laws, but to one watcher it seemed that only Christian Science could satisfactorily explain "the power back of gravitation."

Referring to Newton's discovery of the law of gravitation in her book "Miscellaneous Writings" Mary Baker Eddy says on pages 22 and 23, "True, Newton named it gravitation, having learned so much; but Science, demanding more, pushes the question: Whence or what is the power back of gravitation.—the intelligence that manifests power?" A new world will be opened to all who read with unbiased thought her answer to this question. And a little farther on she continues, "The prophets, Jesus, and the apostles, demonstrated a divine intelligence that subordinates so-called material laws; and disease, death, winds, and waves, obey this intelligence." 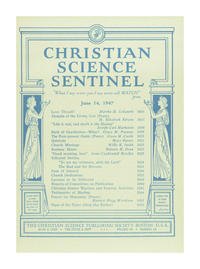